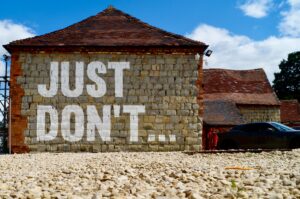 Did Elon Musk really do that? When his dedicated assistant asked for a raise to equal the level of contribution she was providing, did Musk really say, “Take two weeks off and see if you are indispensable,” and then realize she wasn’t, and then fire her? There are variations of the story, but notably, Musk doesn’t seem to dispute the two-week test. Is this an indictment on Elon Musk? No. It’s an example of how we get to the idea that we are “just a.”

It’s amazing how many come to coaching using this vernacular, no matter what level they’re at.

You’d think that it would go away at the high levels, but it often doesn’t. A CEO might say, “Well, I’m just the CEO of a small company. I’m just an owner of a company with less than one hundred employees.” And the goal posts keep moving — no matter how much you accomplish, there will always be a reason to diminish it, to say “I’m just.”

The idea that we are just — just enough…is almost unfathomable for many.

But the reality is all work, all of us — yes, all — is incredibly significant, whether you’re a CEO or a janitor.

Consider one of the greatest American tragedies of our time: the explosion of the Spaceshuttle Challenger. That explosion was traced to a tiny, barely noticeable o-ring. Do you think the work of that o-ring was ‘significant’?

Now, is an o-ring as significant as the motor or nav system? Apparently, yes. It had tremendous power and influence. It brought down the ship, and sadly too many lives as well.

You’re not just a. Your work deserves respect. You deserve to value what you do. Don’t diminish that, don’t write yourself off by saying you’re just a _____. And know you are enough.  Whether your boss gets it or not.

Photo by James Orr on Unsplash