One Simple Step To Turn Your Office Culture Around 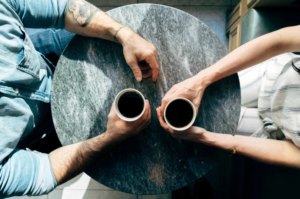 I once worked with a team that was — and there’s no gentle way to put this — highly dysfunctional. Most of the team was unhappy and in conflict with the manager, who couldn’t really see the problem. When I asked the manager about the problems the team had listed, he simply said, “Those problems don’t exist.” I asked him to elaborate, and he gave his side of the story.

“It’s a startup,” he explained. “We’re building the ship as we sail it, so yeah, everyone’s busting their ass; it’s stressful, I know, everyone wants it to be more fun, but they signed up for this knowing it was an entrepreneurial adventure. All they really want is for it to be more fun!”

Having heard both sides of the story, I was shocked. “It’s all about the fun?” I thought to myself.

“Are you sure about that?” I asked. “Is that really the issue? Is it that simple?”

It is amazing to me how often we operate on an assumption that makes perfect sense in our head, that the evidence from our perspective and bias totally supports — only to find out later we were off the mark, solving the wrong problem, judging people for truths that aren’t theirs. And we rarely think to verify.

So I challenged the manger to make sure, to verify — to ask specific questions, to understand what his team really needed to thrive, what they really wanted. Specific questions like:

“Help me understand your perception of our culture. How do you see this team?”

“What’s the biggest obstacle to our success?”

“How do you want things to be different?”

“How are you willing to help?”

Thankfully, he was willing to take this challenge. He went back on Monday and asked those questions throughout the week. I called him Thursday to see how things were going, and his response was enthusiastic: “You won’t believe the difference in this place!” he exclaimed. They were having more conversations on the heart of things than ever before; his relationship with his team was completely different.

By simply taking a pause and engaging in a clarifying conversation, extending an invitation to understand, it went from a culture where the team believed and said to me point blank and verbatim: Our boss doesn’t have our back.

To a culture where they now exclaim: Our boss honestly cares about us.

You better believe that affects productivity.

And it was such a simple change: All we did was turn an assumption (“They just want it to be more fun!”) into a concrete question to get at the heart of the real problem — the team didn’t feel they could trust the manager, that he really had their back. It had nothing to do with fun.

Every business problem is a people problem. Seek clarity instead of assuming — our assumptions are rarely fully accurate.