Understanding Our Circle Of Influence 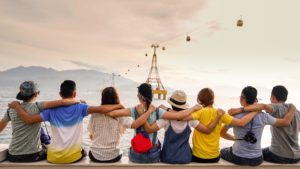 “We are in a circle of influence, not a chain of command.”

In the immortal words of Rodney King: Can we all just get along? It would be so easy if it weren’t for the many people with whom we just disagree. How do we influence or lead those folks — when we come from such different places? Are we supposed to be able to? Aren’t some of our differences irreconcilable? I know I have opinions that I’m not willing to budge on; I’m sure you do, too. There are a great number of topics I will NEVER be able to agree with everyone on…but does that mean there’s no hope?

Recently, in a conversation with a client, a strange thought popped into my head: We’re not really supposed to. We’re not supposed to get along with and influence everyone! …Only those that we can. The rest we are meant to respect their humanity.

We live in a circle of influence, not a chain of command, says the author William Young. And influence isn’t control, or the ability to create wholesale change in another. My influence isn’t a magic potion that converts others to my way of thinking and feeling. Influence is effect, impact, sway, maybe even pressure or guidance. Even if it’s more authoritative than that based on your position or power, you may influence another in a way that affects their behavior. But, if it pushes against and contradicts their values and integrity, the impact will be based on survival, not change. And if you accept your influence, then one must accept that everyone holds their own circle of influence. These circles are not separate, but interconnected, each linked together in an unending chain — not of command, but connection; a chain that ultimately connects everyone on the planet. It’s like The Six Degrees of Kevin Bacon.

What this really means is that no two people on the earth are more than six degrees of separation apart, theoretically. What links me to the person further down the chain is everyone in between us. We influence those with whom we make a connection. And what seems to trip us up is this ill-gotten belief that we are all supposed to be able to directly connect with everyone and anyone. We can’t be close with everyone, and we don’t connect with those outrageously different than us. But we do connect with “the 5 people” in between. Everyone we connect with has their own influence, and like dominos, they connect with the people next to them, and so on down the line.

THE most common word I hear used to describe leadership is “influence.” Part of what we struggle with as leaders is this idea that we need to make these enormous wholesale changes and the mark of “real” leadership is the ability to win over everyone. We don’t, and it’s NOT. Heck, even Jesus couldn’t do that. What makes great leaders great leaders is the recognition of their limits, and if I can’t make a direct connection, I will find someone in my circle who can. We just have to find ways to connect. If my connection to you is strong, and you’re just different enough than me to have your own circle, you could extend our connections further. We build this chain of community — of humanity — through interlinking circles of diversity.

Despite how dramatically people can seem to differ, we can start to recognize that we’re still just a few connections apart. If I trust the person I connect with, and they trust the person on their other side, then perhaps I can trust that third person through association. If I can be “guilty by association,” can’t I be influential through association? If so, your influence in your own small circle extends further than you could ever plan or realize — around the whole world, in fact.

Photo by Duy Pham on Unsplash