We Are Not Self-Made 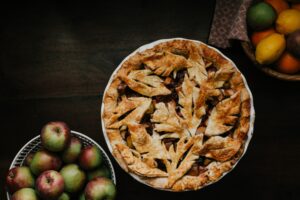 If you wish to make an apple pie from scratch, you must first invent the universe. – Carl Sagan

The problem is, there’s no such thing as self-made anything.

So, if you really want to make an apple pie from scratch — from the real ‘scratch’ — you must first invent the universe.

If you’re not delusional, you’ll know right away that you cannot invent the universe. Therefore you can’t truly make the pie ‘from scratch’; you must benefit from the farmers who grew the wheat, the truckers who got it to the factories and stores, the construction teams the built the roads those trucks drove on, and so on.

The same is true of any accomplishment. We are none of us self-made, if for no other reason than we didn’t make ourselves. Our parents did. We stand on the shoulders of the people, inventions, and developments who came before us, and we stand with the aid and support of those who love us, who believe in us, who have helped us. We all have received help, or coaching, or guidance, or at the very least a person who raised us to form us into the kind of person who could accomplish what we have accomplished.

We can’t escape it — and that’s not a bad thing. We don’t need to be “self-made.” We can instead be grateful for all the giants upon whose shoulders we stand, as well as those friends or family who’ve helped us, celebrate the colleagues who supported us, and be proud of ourselves for the work we did and the genius we contributed.

That’s right: we can still be proud. Recognizing that we aren’t self-made doesn’t mean we don’t take pride in our contribution. We do. It just means we recognize we didn’t, & we couldn’t, do it alone. And that’s okay. It’s good, actually, because we’re not meant to do it alone.

And whoever did invent the universe, I’d be willing to wager they had help, too.