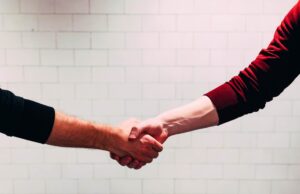 When we hire people, we sign a contract that spells out the expectation and rewards for performance. Do this job, you’ll get this pay. Do more than the job required, and you’ll get this bonus. Simple, clear, direct…that is, when it actually isspelled out that clearly, simply, and directly, which often it’s not.

Accountability it about support, teaching, leading, and problem solving. Help them succeed, and they get the compensation previous defined. No one expects more because you “helped them” or “held them accountable.” And if by chance you’ve helped them and they missed the mark, they certainly aren’t blaming you — so why blame them?

Don’t get me wrong. Sometimes people are lazy, uncommitted, and skating along doing the minimum because they can. The vast majority of folks, however, aren’t like that.

Therefore, accountability is ALWAYS positive, regardless of the outcome.

Look at it this way:

Let’s say their goal is selling 1,000 widgets by December. If the goal is clearly set out at the 1st of the year, what does real accountability look like? For most, it’s a threat:

“How’s it going?”
“Any Questions?”
“Anything you need to be more successful?”
“Hey, I noticed this, can I share an idea that might help?”
“How are you feeling about your progress?”

By the 1st Qtr check in, PA already knows what’s happening, and the success and challenges faced. So, PA might say:

To the person ahead of their goal:

“Awesome! You’re 25% into the year with the busiest quarter ahead of you and you’re already at 31% of your goal, well done. What’s working, what’s not working, what can we do to help even more?”

Or, to the person behind:

“Hey, Jim, I know you’re behind target, and we’ve made some real progress when we implemented the idea _____, so let’s do a more formal analysis.  The busiest quarter is still ahead of us.  What’s working, what’s not working, what have we not tried that you’ve been nervous or unsure of to implement?”

In either case, we’re pulling alongside them and being a resource, not a judge. At the end of the year there are no surprises, and if they missed the mark, everyone knows why, is clear on the effort put forth, and not nearly as nervous or uncomfortable about the conversation, because you’ve been having it all along. They know you’re on their side, rooting for success, rather than waiting to catch them doing something wrong.

If they’re exceeding and happy, great! Continue on.

If not, at least you know if it’s a result of poor effort, attitude, or commitment. Then you can take appropriate action. If not, then get creative. Maybe the goal is too big for them and a simple adjustment would be more empowering. Perhaps they’re in the wrong job, and where they truly shine is in a support role. Or maybe they turned out to be a superb presenter but a terrible closer, and even though Mary closed her goal she was a far less effective presenter who would have closed twice as many deals if she could present like Jim. Perhaps there’s a team approach that achieves an overall better result.

This is accountability: Doing the accounting, balancing the books of performance, and making sure column A (ability, knowledge and understanding) adds up to column B (Expectations and goals). We don’t fire the check book when there’s an error, we solve the problem. Do the same with your people. Change accountability from punishment to support and leave compensation in the compensation column.  It has no role in accountability.

Photo by Chris Liverani on Unsplash