Facing the Lions: How Far Can a Leader Go to Define Culture? 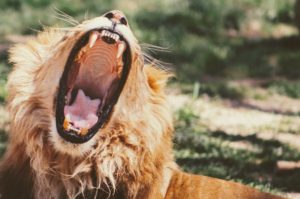 In a recent past post, we talked about how we typically form culture by accident rather than design. Which is important, to be sure. But it also begs the question: When it comes to culture, what do we have the right to define, as leaders?

A client of mine had a recent conflict among her team. In one group — we’ll call them Group A — they were fond of using, shall we say, colorful language. The rest of the team — Group B — was not fond of that habit.

My client told me, “Well, I’ll address it of course — but it’s not like I can tell them to stop being who they are!”

“Interesting. Is that how you see it, ‘asking them to be something they’re not?” I asked.

“Well, until you replied with that question I did,” they sheepishly responded.

The truth is, you absolutely CAN say: “We’re developing a culture that elevates the quality of our language. We’re choosing to be, in the words of Don Miguel Ruiz in the The Four Agreements ‘impeccable with our words.’”  We absolutely can decide to be impeccable with our language, and in doing so not be asking anyone to be anything they’re not. After all, we all change our language depending on our environment. We don’t sit in church and talk to the pastor, or to our grandmothers at the holiday table, the way we do with buddies drinking at the bar (well, at least I hope not). Our language is a choice and we chose all kinds of versions of that language depending on the environment and circumstances we find ourselves (Listen to this story to see what I mean). Why can’t we ask our team to chose the best version of themselves when being a part of our team?

It might feel awkward to ‘regulate’ our team’s language, or other aspects of our team culture. But it is up to team leaders to call forward that better version of ourselves — whatever it looks like for your team. Think about it: we’re all more capable, more successful around great leadership, aren’t we? A great leader inspires us to be better. Leadership removes obstacles, supports us, builds us up — and challenges us. That’s one of the courageous acts leadership calls forward in us: To step into the den, and face the lions (or people who feel like lions) and be bold about what’s important to you and the team. It may feel “dangerous” or scary, but that’s what leaders are called to do — not to digress to the lowest common denominator, but to lift up to the highest possibility.

Photo by Joshua Hoehne on Unsplash