I Couldn’t Face My Contract 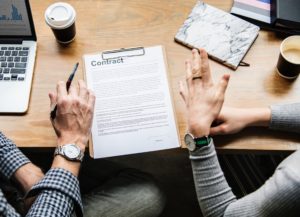 Just because it’s obvious to you, doesn’t mean it’s obvious to them. This could be true professionally, personally or otherwise (is there an otherwise?). What seems so obvious from the outside can be invisible from the inside. Here’s an example. Remember the course I audited and wrote about last week?  Well, I was so hooked I went back for the follow-up program: a 4-day workshop that turned out to be one of the most difficult challenges of my life.

The objective in this program was to write a contract with yourself; something that would hold you up to, you know, the person your dog thinks you are. As you can imagine, I actively participated and was wholly engaged in this fantastic program. When it came time to write this contract, however, that which we’d been working towards for four days — it should have been simple. We’d already done the work.

This was difficult work, facing our truths about ourselves, owning who we really are and how we show up in the world. But when it came time to write my contract, something we were supposed to put into the positive, the truth of our higher self, I had an extraordinarily hard time articulating what my ‘contract with myself’ would be. The facilitator saw me struggling, so she came over to ask what the problem was.

And, if you can believe it — she laughed! “Interesting. I expected yours to be the easiest of the class! You’ve been saying it over and over,” she said. “We all know what it is!” The people in earshot began nodding along, to my dismay. What was I missing?

She took my paper, and wrote what everyone else could see so easily — but for me was invisible. Then she handed it back. When I read those words, the visceral physical effect was as real to me as getting hit by a boulder.

“Did we get it?” she asked with a wry smile.

But I couldn’t. Not at first. And mind you, we were in a very safe space. I had come to trust these people with my truth and my weaknesses. There was no risk. But I just couldn’t say those words aloud. They were too powerful; too much of what I wanted to be, not enough of who I am. When I finally mustered the courage, the class burst into gentle, compassionate laughter. They weren’t laughing at me, of course; they were just laughing because it was so obvious to them. “This is who you are,” they said.  “This is how we have come to know you,” they continued.  “When you can own this truth, well…”

And to be honest I’m not sure what they said after that, because this was a difficult truth for me to own. This was not how I saw myself, but it was wholly how I wanted to be.

My contract read: “I am a good man. Genuine, vulnerable, and grounded in the moment.”

And it sounds so stupid to say out loud or to share. I am sure you were expecting something much more profound after that build up. But this was difficult. Me? A good man?  Vulnerable? Grounded in the moment? Surely the evidence is against me. But the class told me, even if I can’t see it, they can. It’s already who I was and am!

As leaders we often see in people their gifts, their strengths, their superpowers…even when they can’t. Notice when those you lead, professionally or personally, seem disconnected, unable to see in themselves the greatness you see.

Maybe your leadership is to show them that path.