It’s Always Toughest To Be First 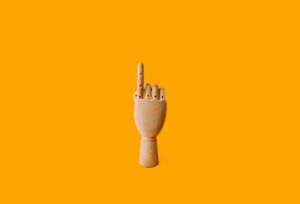 I know someone who recently left an incredibly toxic work environment. It was a long time coming — he really did his best to stick it out, to try and make it work, to do his part — but nothing was enough, because, as my dad used to say, “You can’t make chicken soup out of chicken poop” (OK, so he didn’t use the word ‘poop,’ but you get the point). Sometimes we just need to commit to a courageous act.  But we resist, of course, because we often second guess ourselves, and don’t quite know if we can say for sure if it’s toxic, or if it’s just us — maybe if we’d just try a little harder, it might get better?

But it’s not just us. Case in point: after this person left their job, two more people quit within the span of about a month. That’s a total of three employees leaving this workplace in under six weeks! And just like that, one’s courageous act gives others permission to do the same.  It’s like that closing line in the Marianne Williamson quote:  “As we are liberated from our own fear, our presence automatically liberates others.”

Sometimes, when no one else is making the change, it can be terrifying to be that first person to take the leap. If no one else is leaving, it’s harder to justify — because again, we’re second-guessing ourselves. But as soon as one person makes that leap, it’s as though everyone else sees the problems clearly. Our questions are justified when we’re not the only one asking them.

Is it time for you to be that first person in some capacity? This rule can apply to anything, not just quitting your job. Your environment might not be toxic, but this truth is universal: It’s hard to be the first. We become sensitized to things, accept oddities as “normal,” and don’t think to ask the important and powerful questions. Just think how often we use the phrase “That’s not how we do it around here.” That’s what makes coaching so powerful: we’re outsiders, and often see the unasked question that have become invisible to others — so we can challenge the status quo.

When you take the courageous leap to be the first, you equip and empower those around you to think differently and to make that better choice, too. Maybe it’s asking for a raise. Or suggesting an idea in the weekly meeting. Maybe it’s going home to your family at 5, instead of staying late like everyone else. Or standing up for gender or racial equality in your firm. Whatever it is, even if you’ll be the first one, what would it take for you to do it?

It might not be just yourself you’re helping out.

Photo by Charles PH on Unsplash