On The Manifest Movement 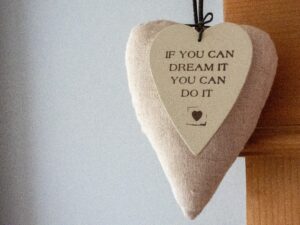 Are you familiar with the Manifest Movement? It’s this idea that we can visualize and imagine our goals and desires so strongly, so perfectly, that they actually come true. It’s so prevalent in our society that you’ve probably at least heard or seen a reference to it somewhere, if you don’t actually know someone who subscribes to it. Perhaps you yourself believe in this philosophy. With the type of work I do, I wouldn’t be surprised if a good percentage of readers here believe, at least in part, in the Manifest philosophy. That’s actually why I wanted to write about it today; it’s probably of interest to you in some way.

There absolutely is power in visualization, in positive thinking, in believing in yourself. Professional athletes use visualization techniques before events. Studies consistently show that optimism has a positive impact on our health and well-being. These aren’t just woo-woo feel-good articles; there’s science behind this. And I think there’s a lot of power behind choosing to manifest your goals.

There is a problem with the Manifestation Movement, too, and that’s when it morphs into toxic positivity. This type of positivity turns from an encouragement to a judgement: “Well, if you didn’t achieve your goal, you weren’t believing hard enough,” becomes a subtext, or outright spoken accusation. And that simply isn’t fair — or accurate.  There are situations which no amount of manifesting or positive thinking can pull a person out of, and blaming that person — whether it’s someone you know or whether you’re blaming yourself — for the suffering they’re enduring is downright cruel.

Now, bear with me: I do think that, no matter your goal, using the power of ‘manifesting’ will undoubtedly help you get there. It turns your attention on what you’re looking for. If you want a new job, but you aren’t looking for opportunities, you’ll have a harder time achieving that dream. But if you’re tuned in, believing the opportunity is coming — expecting it to come — you’re much more likely to actually see it when and if it does come! But it’s the ‘and if’ part that’s critical. There is a level of luck to any amount of success; that’s just the way things work. If the opportunity never actually comes, it doesn’t matter how hard you work or how clearly you manifest, you can’t take an opportunity that isn’t there.

Luck, hard work, and belief (or manifestation!) — these three are necessary for success. If you don’t believe you can, if you don’t visualize and expect good things to come, you won’t work as hard and you won’t notice when those good things do arrive. And if you don’t work hard, it won’t matter how much luck you get, it won’t do you much good. But if you do the work, belief profoundly in yourself, AND get lucky — well then, that’s where real success rings.

But we can’t blame a person who doesn’t have that luck. That’s the distinction I think is essential to make. We can manifest all we want, but let’s not use that as a reason to abandon compassion. We need to have grace with others — and with ourselves. Manifesting, after all, ain’t easy.