The “C’s” of Life Can Be Tumultuous & Rough 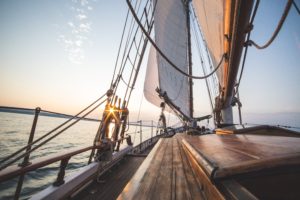 Navigating the “C’s” of leadership and change can be hard, because those C’s are made up of challenges, conflicts, chaos, calamities, complexities, cynicism, cruelty and more. And we’re expected to be the captain of our lives and the lives of others. How do we navigate that and not get worn down or cynical ourselves?

Let’s break down a few of those dangerous seas — I mean C’s — and see how we navigate their challenges.

Conflict is a tumultuous sea because it’s a clash of values. Each side wants something that is important to them, that they hold dear, or at least hold as more desirable than what the other person wants. Ultimately, conflict forces a choice. The question is, are those choices conscious?  Are you conscious about what you feel, what you are reacting to, how you see the other person, or the story you are making up in your head about what “winning or losing” means? If not, get conscious about these things. They are your insight and your power.

Without choice, conflict just feels Chaotic, almost like things don’t make any sense, that the “facts” don’t add up. If they did, you think to yourself, there would be no conflict or chaos — because it would all make sense. If you find yourself flailing around in this “C,” grab the life ring of Curiosity. In most instances, the disorientation of chaos can be easily calmed by asking powerful, positive questions that seek insight and understanding.

Without that insight and understanding, you risk serious calamities. Like sailing on the real seas, Mother Nature will always win. You can’t fight her, you can only move with her. It can feel scary, at times even a bit out of control, which is why calamities take courage. The kind of courage that looks at fear as a positive, as a trusty crew member to be consulted and understood. The kind of courage that realizes that same crew member would make a sucky captain because they only see one perspective. Courage can be borne of insatiable curiosity, because the more you know, the less scary things and people seem.

But I get it. You have a lifetime of experience. You have proof and evidence of the way things and people are. After all, people don’t change, right? You’ve become Cynical. I get it. Oh, sorry, some of you want to call it realistic. But it’s not. Realism is an ability to see, understand and accept the facts and truth as it is, not how one wants it to be. But it’s also knowing that nothing is permanent. The realities of yesteryear are no longer the same today, from the world being flat or the center of the universe to the abolishment of slavery, things once believed to be absolute are no more. Cynicism is like a conclusion; it’s simply that place you got tired of thinking. Now, the antidote for cynicism is scary, I admit. And it’s borne of courage, which is rooted in curiosity, which is founded in choice, but it’s one of the most powerful tools of navigating leadership and change: Connection. The ability to see another person for who they are, not who you want them to be; the ability to feel what they feel, not because you are them or even agree with them, but because you want to connect with them. We connect at that heart level, not at the head; connection is the ability to turn the page and begin writing a new chapter to that story in your head about what is possible and who we as people are.

I know, I know, it’s not that simple. You’re right. That’s why the last “C” of challenge is Complexity. The world is a complex place, as are feelings, relationships, and building community. So what? The mistake that most of us make is trying to reach a new destination while holding on to what they know. It was Andre Gide who said, “You can’t discover new worlds until you have the courage to lose sight of familiar shores.” Something had to change for something to change, which is why Complexity finds its answers in concrete. Not because concrete builds foundations or is rock solid, but because concrete cures, it doesn’t dry. You can’t wet it and put it back to its original parts. It metamorphosis into something wholly new and different. If you keep the parts of complexity that make it complex, if you stay in sight of the familiar shore, you can’t find something new. To put it another way, concrete is about conversion. Like a sailboat to wind.

In most points of sail a boat is not being pushed by the wind as most non-sailors think.  It’s being pulled by the wind through a principle called Lift. What’s remarkable about the principle on a boat is that the vessel is capable of taking the very thing blowing against it, opposing it, pushing it in the opposite direction in which it wants to go and instead of fighting the wind, it harnesses it. It converts it into power and creates something wholly new. A sailboat without wind is a very expensive cork floating in the water. But with wind, with resistance, with that opposing force it has movement, power, energy and opportunity. And with that we can navigate anything: complexity, cynicism, calamities, chaos and conflict.

Photo by Bobby Burch on Unsplash