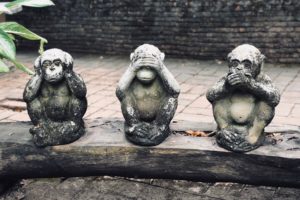 Last week a client said something fascinating: He said he didn’t really know his people. Prior to our work together, that is.

A little context: He was the manager of a team he invited me to be a part of to help facilitate communication and improve functionality. Now that the work is successfully completed, he admitted to me in the debrief that, he came into the work believing he knew his team inside and out. He thought that he knew who would say what, and that our work was really just a forum for them to say it — to vent. He thought he knew pretty much everything they were going to say.

It turned out, he told me, that he was very wrong. He was surprised to find that he didn’t know his people as well as he thought — and said, “that was a fantastic discovery!” Such a discovery opens you up for a wealth of new connections and interactions, because once you realize that you don’t know your people as well as you thought, then you can start to see them with genuine curiosity.

We often operate from this premise that we know people. We think, “I’m a ‘people person.’ I read people really well.” We might even have evidence to support that. But in long term, I can pretty much guarantee — we’re not as good as we think we are. Which is why we need to ask more questions and come at all relationships — especially with those we’re leading — with a spirit of insatiable curiosity.

Only then will you really be able to see them, understand them, and lead them to success.