Getting To Know Your Team One-On-One 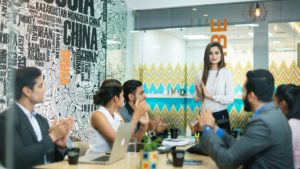 Photo by Smartworks Coworking on Unsplash

Guess what I’ve discovered? I have frequently misquoted Nelson Mandela as famously speaking this beautiful truth: “If you talk to a man in a language he understands, that goes to his head. If you talk to him in his own language, that goes to his heart.” While he has spoken a similar phrase, this one was never actually said by Nelson Mandela — though the words still ring so true.

The only way to speak to a person truly, to their heart, is to know their language. In Mandela’s version, “Because when you speak a language, English, well many people understand you, including Afrikaners. But when you speak Afrikaans, you know you go straight to their hearts,” he was speaking specifically about the language of Afrikaans and being able to eloquently connect with his oppressors through the emotions of their own language. But what I mean by language is something even more emotional: Speaking to someone in their own language means speaking in the way that they are most receptive to listening.

This personal language can’t just be picked up through observation; it must be experienced to be understood. You must actually connect to someone. If you can’t connect, you can’t lead. Think about the coupling between the first engine and the first car of a train; the cars aren’t welded together. They are just connected by a “handshake,” as it were, and those cars could uncouple at any moment with a poor connection. As leaders we are not making clones, but connections, each between independent bodies.

In conferences I have pairs of people interview each other for just one minute — literally 60 timed seconds. They ask questions like: Where were you born? What was your first job? Tell me about the most interesting hobby you had as a kid. It’s amazing the information that can be gathered, and the relationships that can form in just a matter of 60 seconds. People that have known each other for years often learn something new about each other. Two team members previously never knew they were both born in the same small town in Nebraska, until this trivial exercise. The argument that it takes a lot of time to form connections is bogus; but, to be fair, it does take some time. However, what is interesting is these tasks often lead to further, voluntary and enthusiastic conversations and follow up questions that end up taking a lot more than that initial minute. And those conversations are entirely fruitful toward the goal of creating connection with others because in doing so, you learn their language; do they speak with thinking words or feeling words? Are there colloquialisms they are fond of, or stories and analogies that hold a dear place in their heart? This is part of what it means to see someone.

Make a commitment to connect. In the world of COVID-19, that will take on a different meaning, but in truth we are talking connections of the heart and mind more than the handshake or the hug. Social distancing need not mean emotional distancing. Talk to your coworkers individually on a more intimate level. Maybe you both grab a cup of coffee and facetime while sitting on your back porch in the sun, or make it late in the afternoon and virtually share a glass of wine. Or skip the video and just chat! Once a day or once a week, build a relationship with one of your team members. It’s more important now than ever.

It’s really not as hard as it sounds; the hard part is the commitment and getting started. It takes a concerted effort to really “see” someone for who they are. This takes work, but I promise it makes working and leading magnificently more effective.