For When It Really IS A People Problem 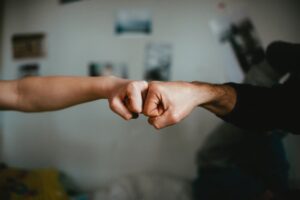 Last week, we talked about people problems versus system problems. But I want to point out that there are real and genuine people problems, sometimes — although, in this example, they are likely not what you’re thinking.

The biggest people problem I experience is when complainers don’t want to admit it’s a system problem.

These are the folks who blame homeless people, without offering any solution besides “They should just get a job.” These are the folks who don’t care that your child is sick; they expect you to show up to work no matter what. These are the people who believe they could do just about everything better than anyone else could, but they certainly won’t step in to help. In other words, they are great at naming weaknesses in others and undermining trust within the team without seeing their role, opportunity or contribution.

We all know people like this, don’t we? And we’ve seen more than ever in the last few years from all sides of the spectrum.

What do you do when you have to work with a person like this? Who only complains and won’t contribute? Who would rather blame anyone else rather than take the time to look for sustainable solutions?

I go back to one of the pillars of my work: Insatiable curiosity.

Be curious. Keep asking questions until you get to the root of what they’re really saying.

Using last week’s example, this person, we’ll call him Bart, says “Ruth is a horrible driver; she can’t stay in a straight line. She’s going to kill someone.”

The problem with his criticism is it makes perfect sense; even if we know there’s an alignment problem with the car, it’s easy to buy into this argument and start thinking that Bart is right, and Ruth is the problem and may be putting others at risk. But it’s a logical fallacy. With a little exploration we can discover the conclusion that “Ruth is the problem” is provably inaccurate.

What if you replied to Bart with curiosity?

You: “What do you think is going on with her driving?”

Y: “Is there anything else it could be? I mean, I’ve driven with her and she seems safe.” (Anything that gets the focus off the person on to some part of the framework that could be influencing the situation. If this were about errors in reporting you might ask if there is a chance the algorithm or formula is wrong?)

B: Could respond any number of ways:  “No”

In any case, be inquisitive:

Y: “I know, let’s ask her.”  (This step will be difficult for many because it can feel like confrontation, but it’s not. And what if there were a serious issue with Ruth? Emotion, depression, alcoholism… you would want and need to know in order to help her and protect herself & those she could hurt.)

Y & B: “Hey Ruth, B shared that he saw you driving today and it looked like something was wrong, like the truck had a hard time tracking. Is something wrong?”

R: “Heck yeah!!! The alignment has a serious pull to the right. It takes everything in my power to keep it between the lines. I put in a service request with the garage about 10 mins ago. Thanks for checking in.”

The illogical fallacies are a killer because it’s easy to buy into a story that makes sense even if the conclusion is wrong. Will the conversation go as smoothly as modeled above? Sometimes, yes. Sometimes, not so much. Just stay curious and ask questions that look for framework, system, policy or other problems that might be affecting a behavior before jumping on the bandwagon and feeding ammunition to Bart. Every time we validate the “Barts” of the world that they might be right in their judgments of another, we empower them to do it more. Instead, we want to call them out that people aren’t always the problem, and to help them reframe their problem solving skills. In the process, there’s lots of room for what Brene’ Brown calls “Generous Assumptions.”

Stay curious. You might just be surprised by what you find.