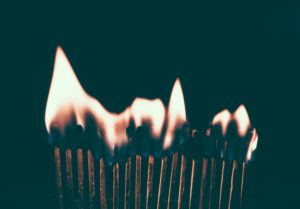 Do you ever feel like your work schedule is simply out of your control? Every day is a series of fixing problems & putting out fires, rather than prioritizing your own work and your own projects. You’re needed so desperately to help out others that you don’t feel like you can do your own work — and your time slips away into everyone else’s eager hands before you can get a grasp on it.

Have you ever considered what would happen if you stopped? If you just — didn’t put out those fires, right away, all the time?

“Well, that’s not really an option for me.”

I hear that. Sometimes it’s not. But sometimes — it actually is. Consider this: You always stop at some point, right? You go home. You clock out. Unless you’re an ER doctor or a firefighter, or handling life-or-death crises in some other way, you do make the decision to stop and leave at some point (even ER doctors). You have to! You can’t sleep at the office (I hope). You can’t go 24/7/365. Maybe that choice to stop comes much later than you’d like it to, or you get sick from stress and overwhelmed and then the others have to pick up the slack without you. Whatever the reason, for the vast majority of us, that time does come. And for the rest of you it does, too — you just aren’t ready to admit it.

Which means it is an option. You can make that choice. It’s hard, and stressful, and might have consequences — but you can make it, and oftentimes we can make it much earlier than we generally allow ourselves. Somehow it just seems easier if we wait until “wits end,” or external pressures force the decision — that way we can feel like we didn’t have to make the decision at all. “Hey, I would have stayed later, but I needed to get home to the family.”

The old saying is: “Poor planning on your part doesn’t constitute an emergency on my part.”

What would happen if you just didn’t put everyone else’s fires out? What do you need to be able to say “no”? Or at least, “Not now, perhaps tomorrow”?

Photo by Jamie Street on Unsplash